So we made it.

After all the running around yesterday we got the train to Dinan and that was an adventure in itself.

After we finished lunch in the cafe we picked up our bikes in the bag and slung them over our shoulders and headed up to the station. I collected our bags from the left luggage and Jane and I stood at the departure notice waiting for our train.

The lovely thing about french trains is they put up the the departure gate 20 minutes before the train leaves and you then have to make your way to the train and find your carriage. Well as can only be expected after our adventures in Paris we were standing at gate 20 and our train was leaving from gate 2 and we were in carriage 20 which was right at the end of the platform. So with our bags and bike we were ready to die with the weight and the struggle of carrying everything and no trolleys and no one to help and then when we got to the carriage there was nowhere to put our bikes so we had to stack them in the doorway. Good safety moment there!!!!

But we were on the train, luggage stowed and could sit down and relax as we were a bit frazzled.

The train trip was lovely. Very luxurious and comfortable. We sat opposite a couple from Brisbane who had come from Dunkirk and there had been a bomb scare on their train!!!

We got to St Brieuc and had to change trains but luckily it was on the same platform and the guard was gorgeous. The train pulled in so we got on and there was a bike rack and heaps of room so while we were waiting for the train to leave we assembled our bikes all ready to go when we arrived in Dinan.

Unfortunately it was raining and was wet so when we arrived in Dinan it was quite wet and we had to find the hotel. Thank goodness for maps.me. Put in the Hotel and within 10 minutes we were there and everyone who had cycled from Dinard had just arrived as well. Perfectly timed.

Max was sitting in the bar across the street but we had to check into our hotel and have a shower and get organised first. That took 10 minutes and Jane and I met him across the street for a glass of wine. Everyone from our group congregated in the bar and and after I had introduced Max to everyone we had a lovely time chatting and having a few pre dinner drinks.

Dinan is a medieval town dating back past the 14 hundreds and it is a walled town with ramparts around it.

We all went off for dinner and I was really surprised that nothing was open until Max told me that in France most things are closed on Sunday and Monday so not much was open.

We walked around town and found a restaurant but they had run out of food and only had steak and chips left. Jane Max and I weren’t interested so we left everyone and moved back out onto the street and wandered the other way and found la longueville and went in. We got a table and had the most delicious meal of scallops and fish and lots of wine then desert and met these mad men from Guernsey who were here playing golf. Well after copious amounts of wine and french liqueurs we staggered out of there went back to Max’s room to get my needle and thread and then staggered back to our hotel. Apparently I found out it was well after 1 am but a great night and good to catch up with the big brother.

My phone rang at 5 am and jolted me out of a deep sleep. No idea who it was as I couldn’t find the phone but I was then awake so set to with my needle and thread to mend one of my panniers and repack the lot for our first day of serious cycling.

As we were up so early we went for a walk around town and it was stunning. Very low cloud but the medieval town with its ancient buildings and ramparts were amazing. That is what I love the most about Europe is the history and the age of everything. 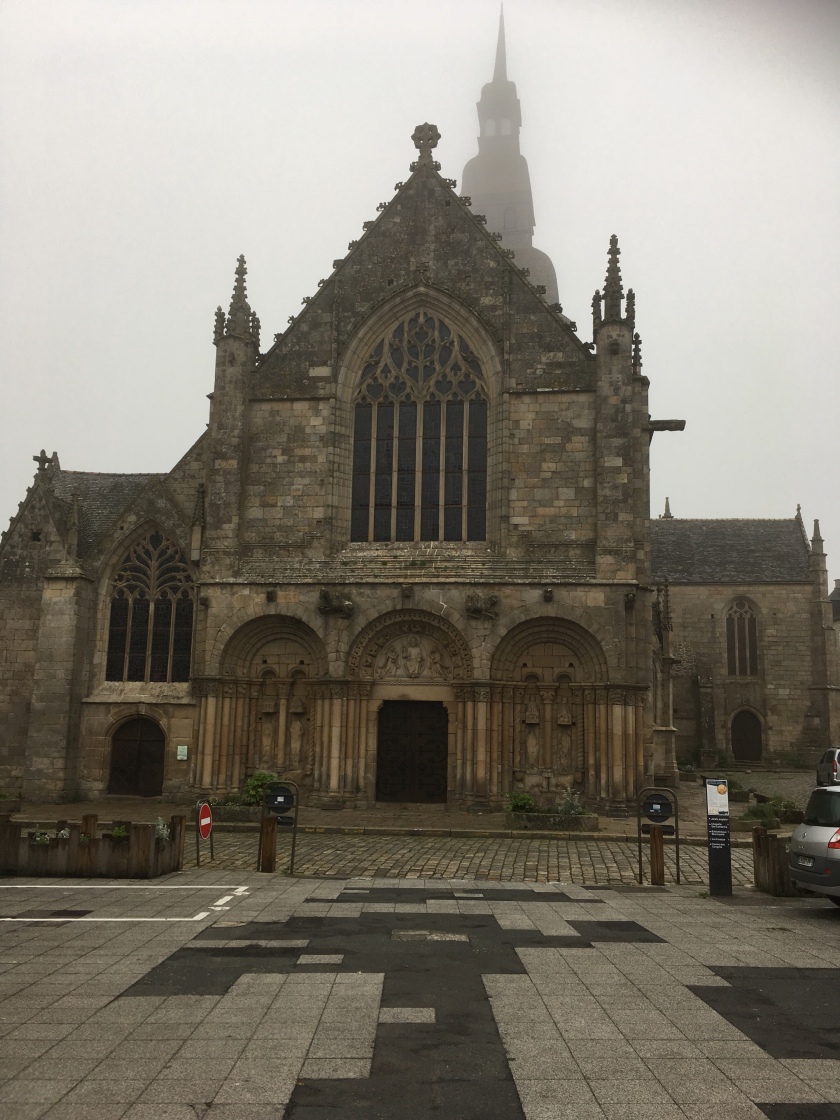 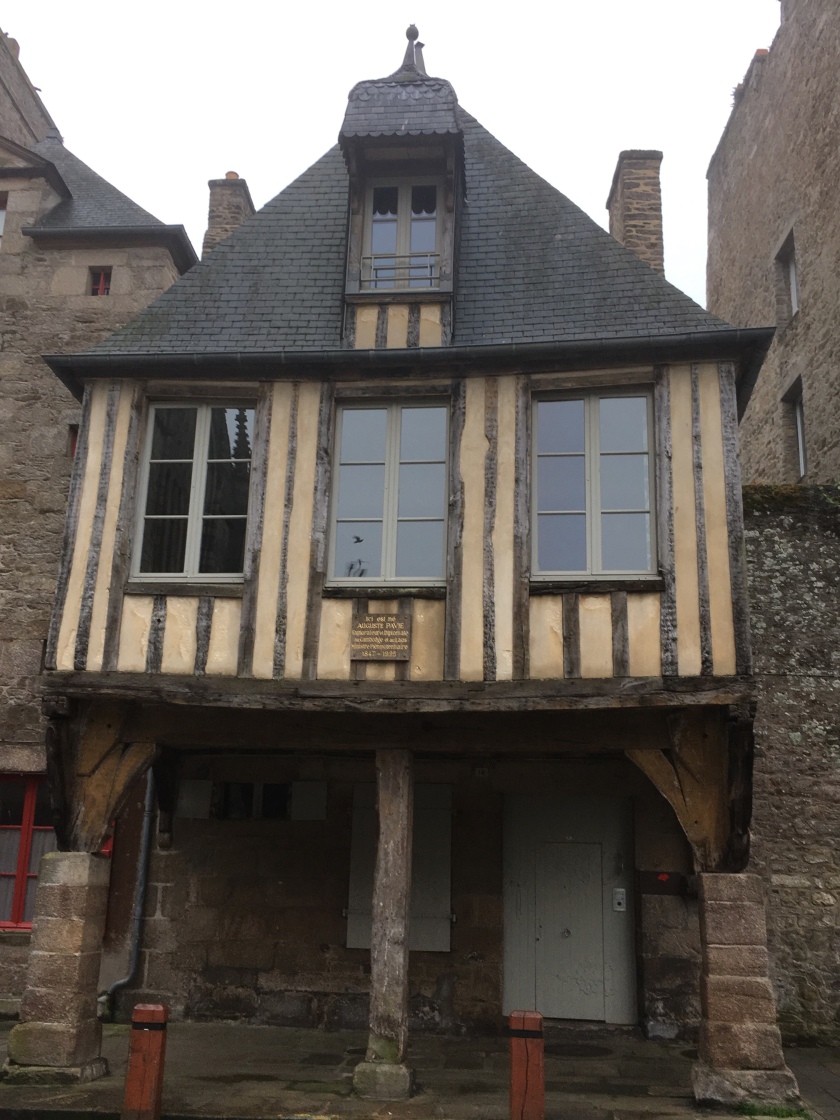 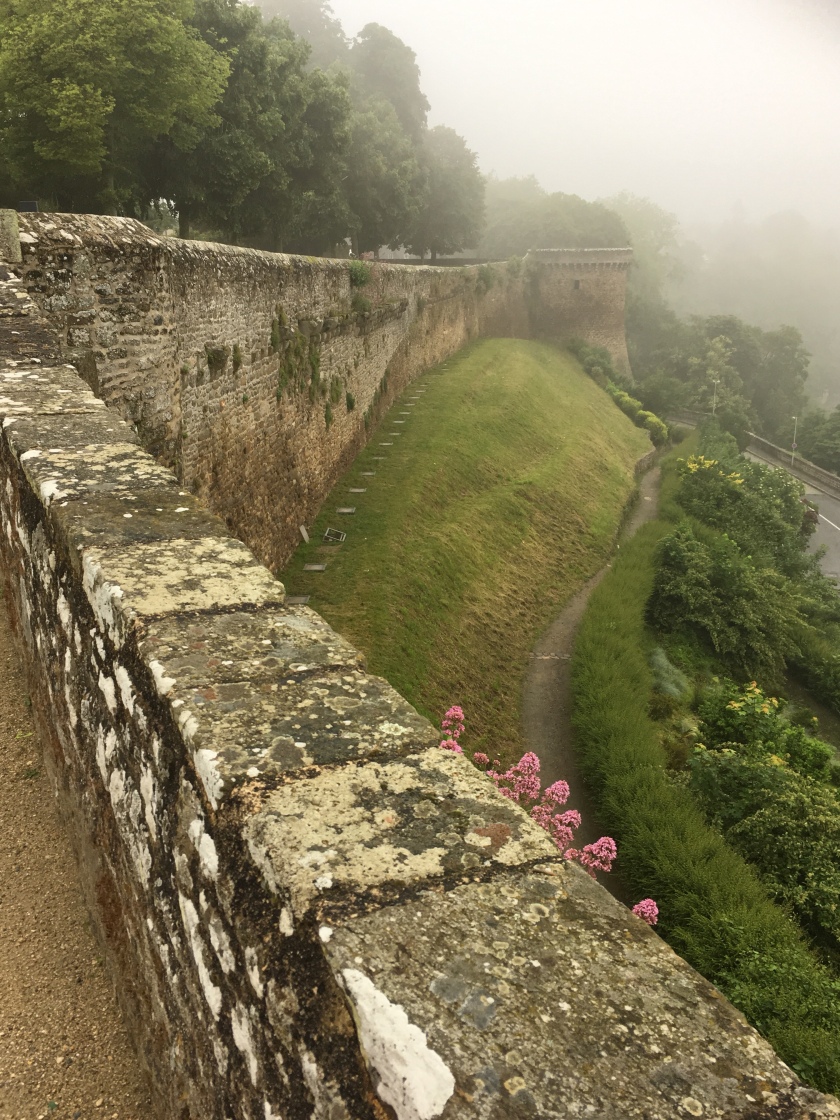 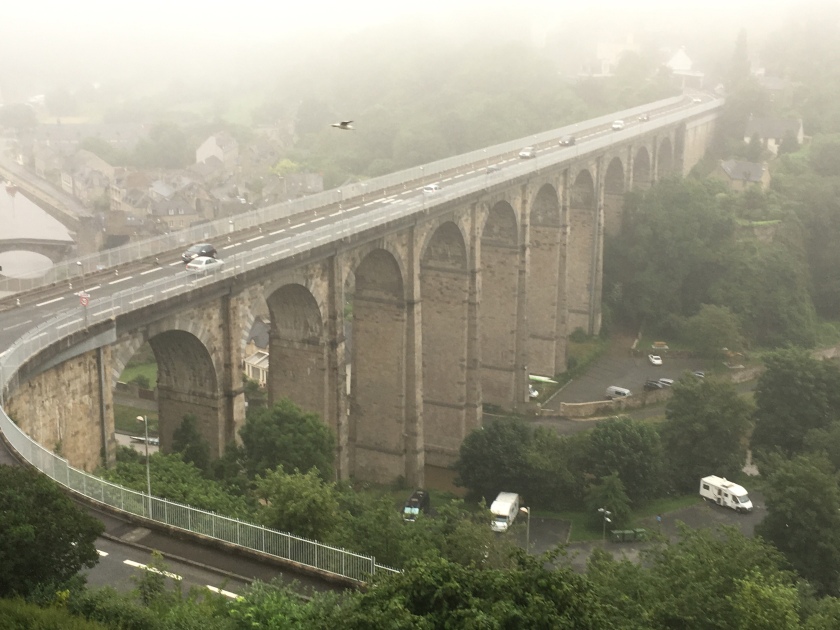 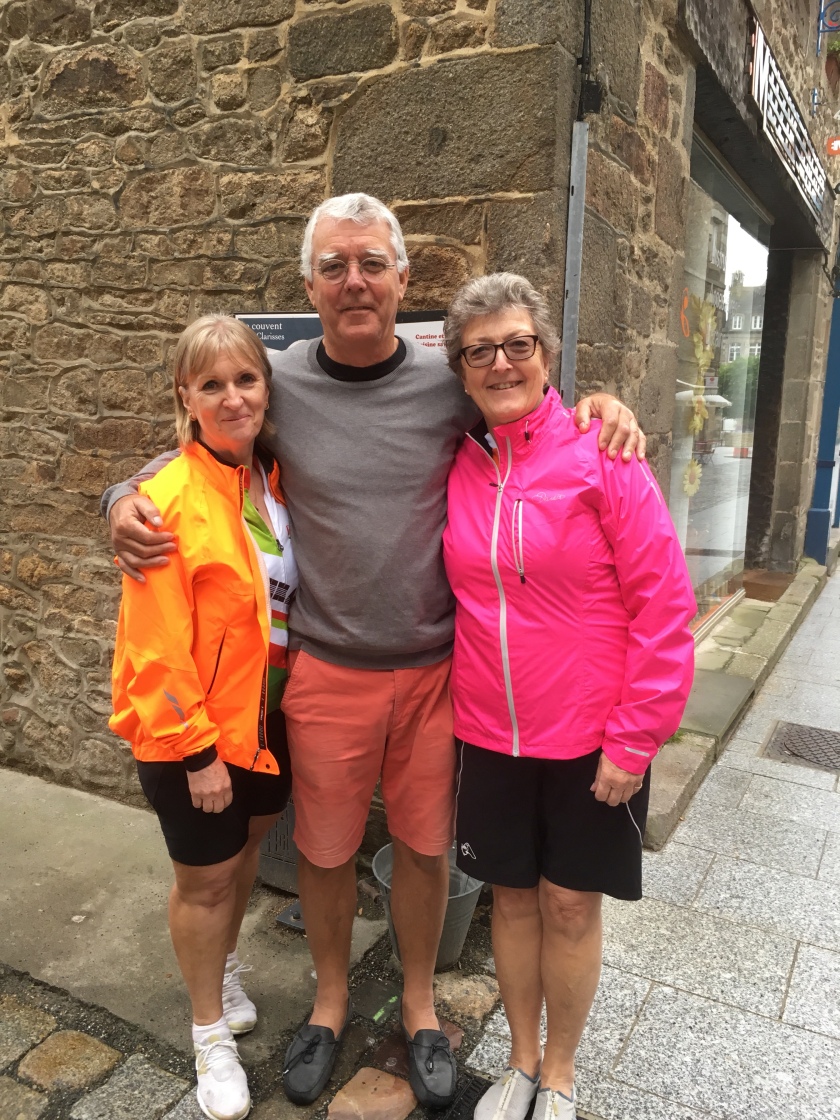 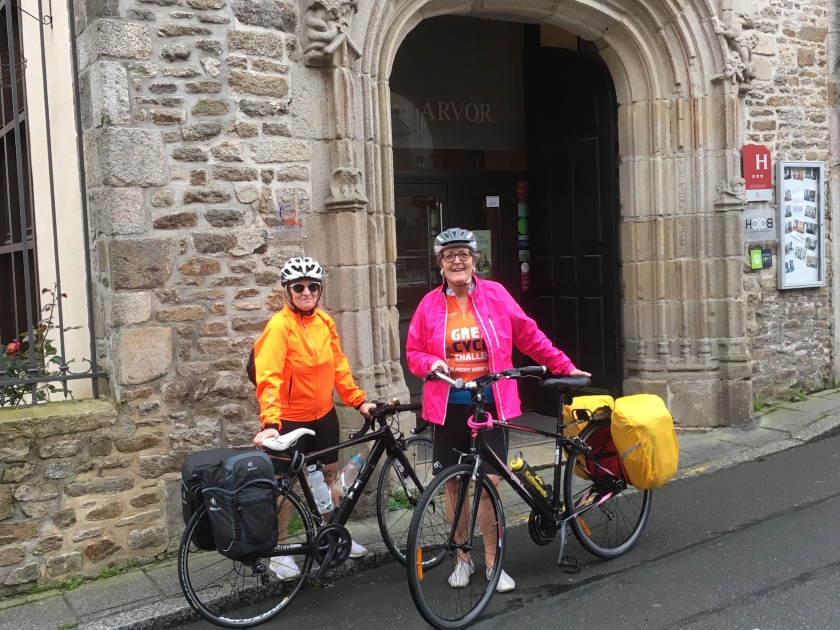 It was very misty but not raining Headed out of town and had to remember to ride on the wrong side of the road. I rode behind everyone so I wouldn’t stray to the wrong side.

We rode down the hill and underneath the fabulous aquaduct you see above and got on the canal bike track that we virtually rode on for the rest of the day. 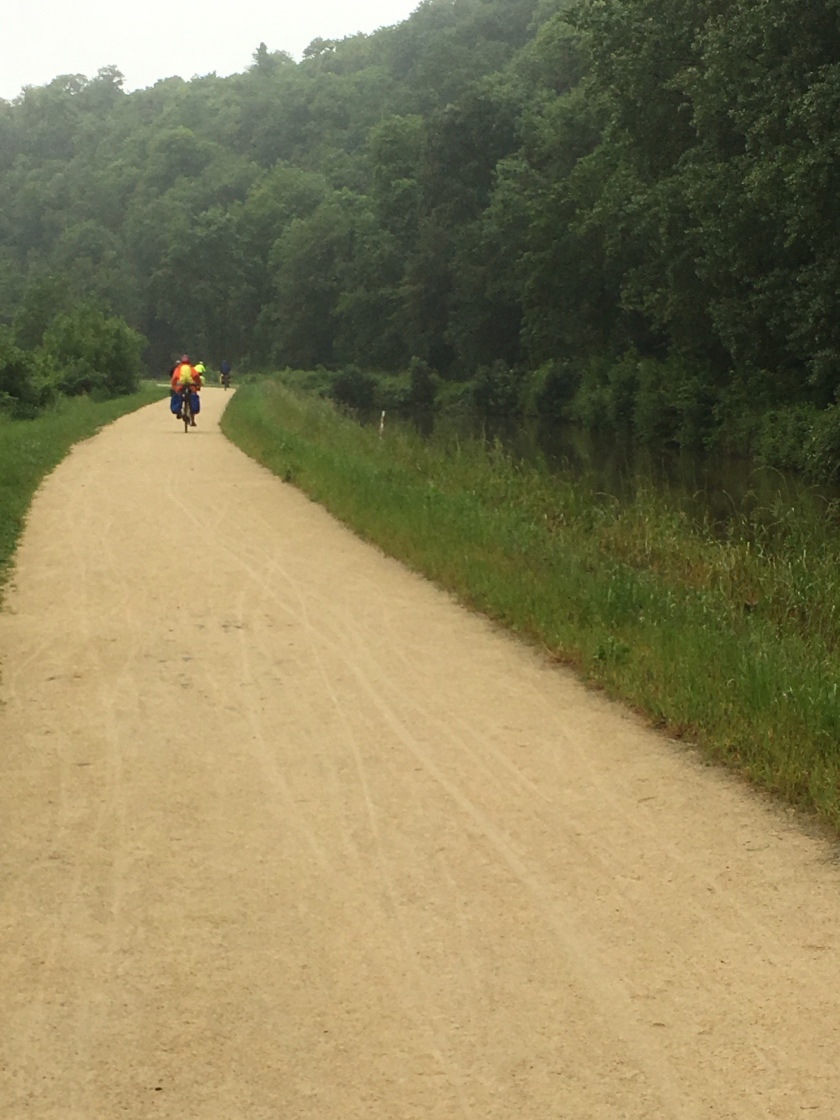 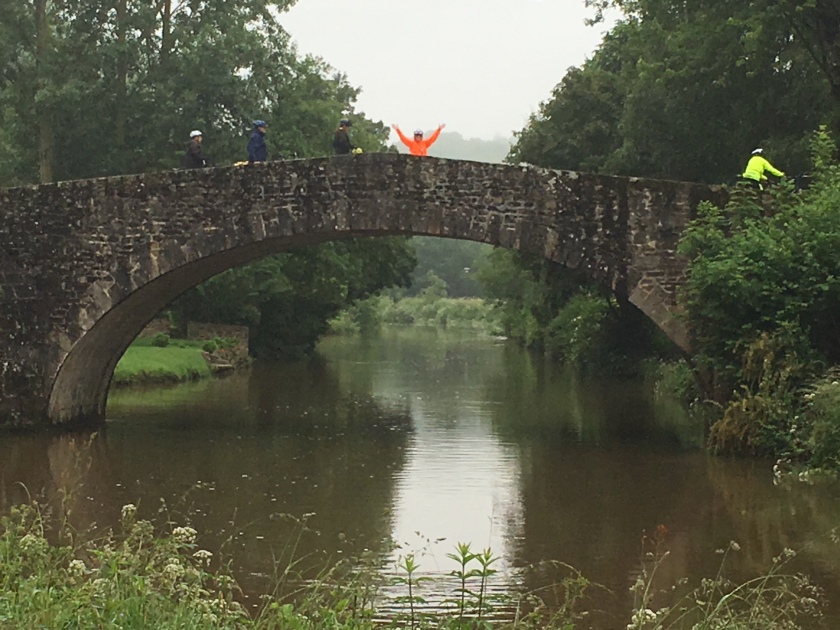 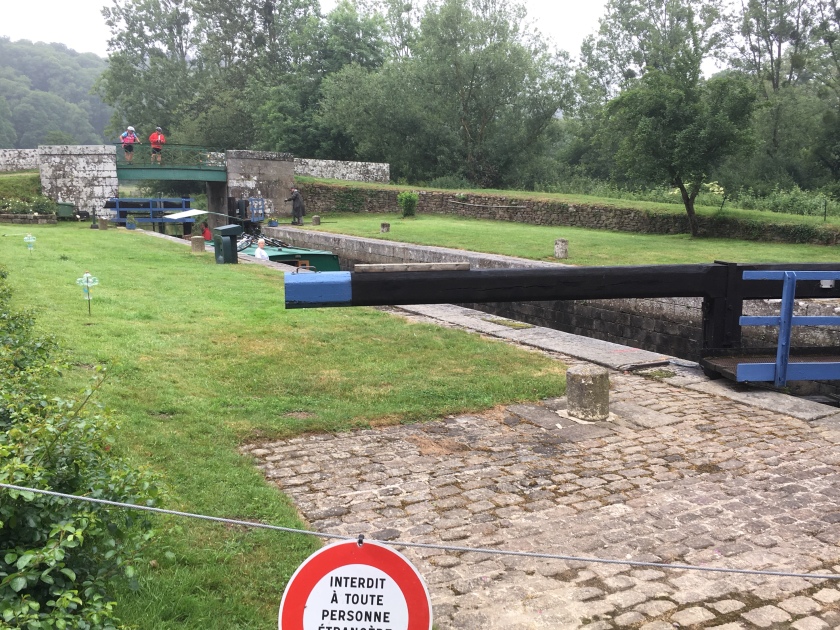 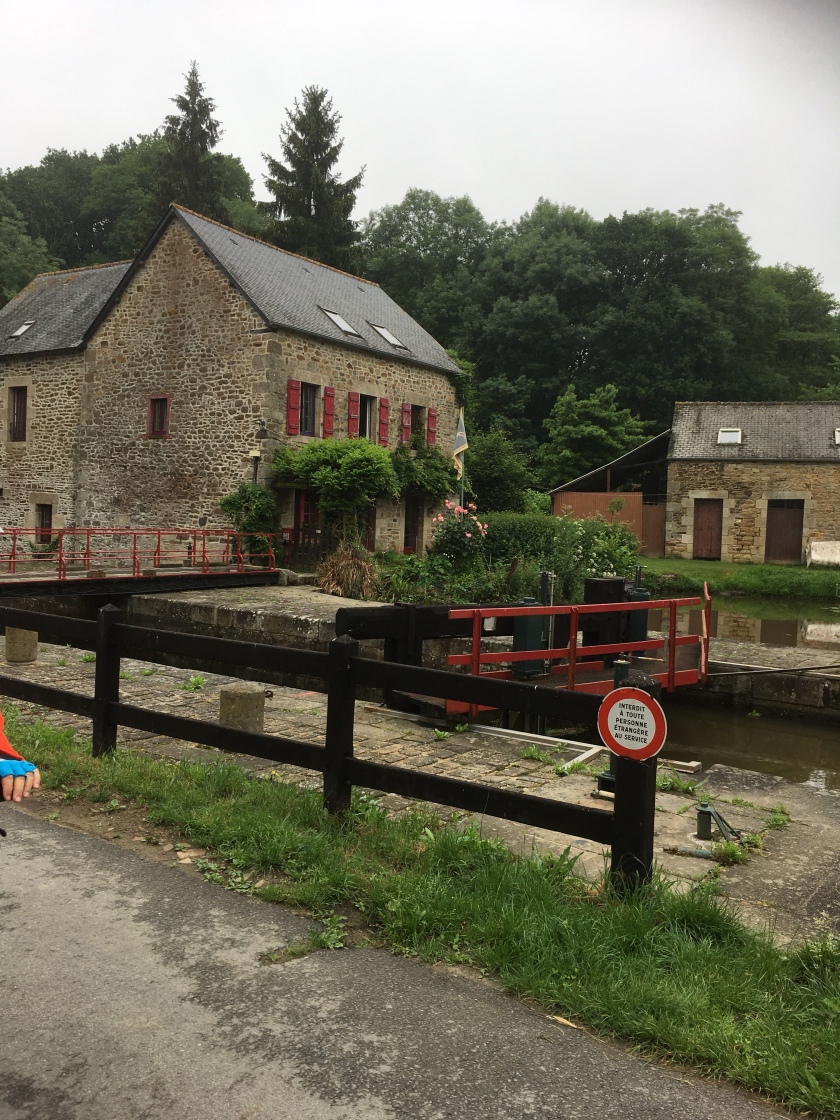 We stopped at a gorgeous little town for morning tea and found out the owner was a man from Jersey who had sold up and moved to France. Best coffee and cup of tea we had had since arriving in Europe 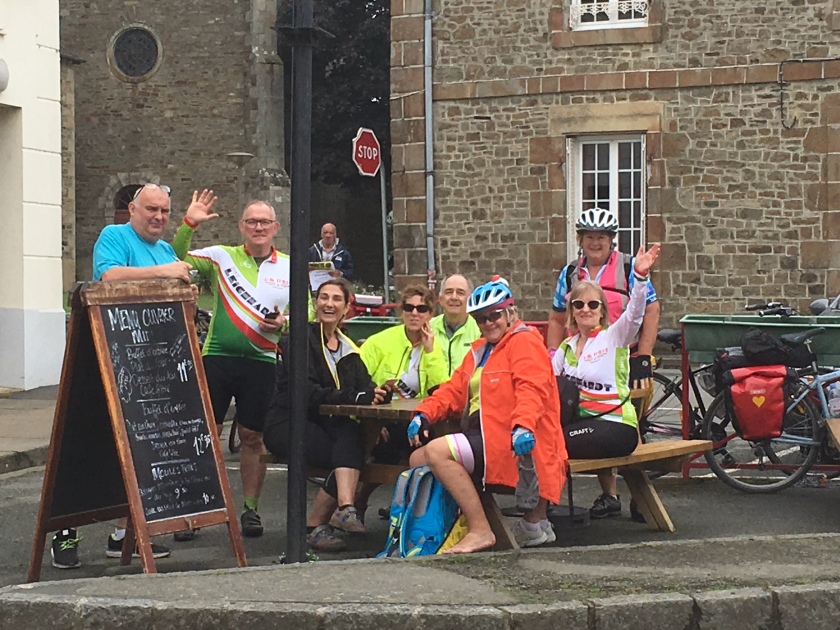 E then set off again along the canal pathway and it was so wonderful. The birds were singing, we saw a little sun but no rain and it was so pretty and green 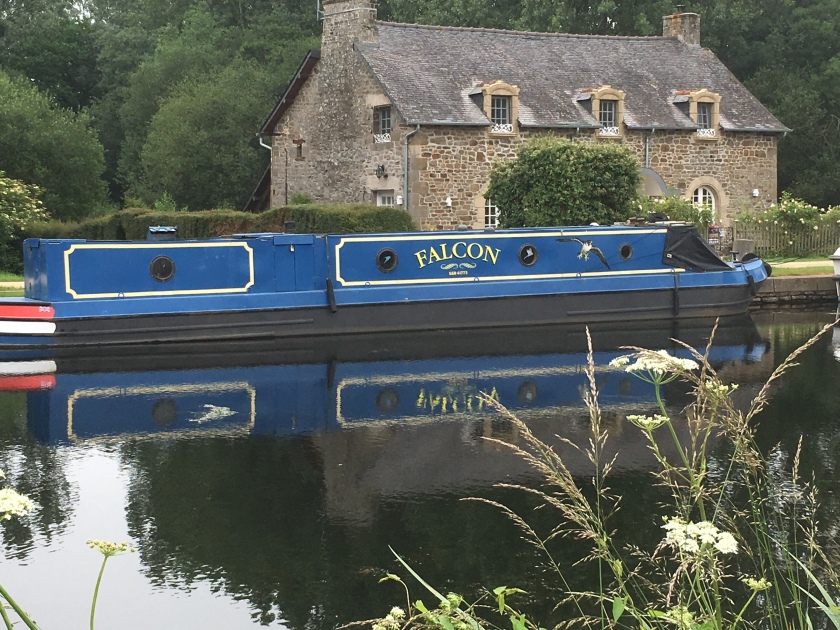 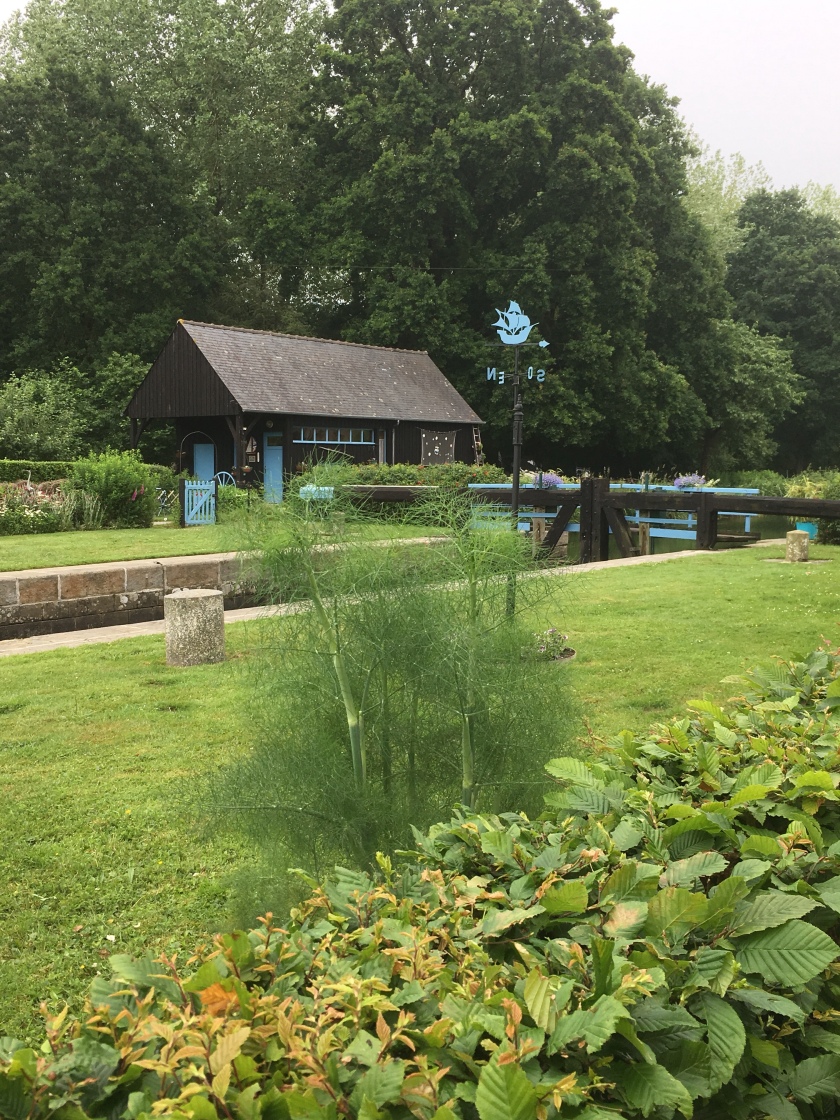 It was a perfect day of riding. We leisurely cruised along the canal most of the day stopping for lunch and arrived in Combourg at about 4.30.

Combourg is the home of Chateaubriand. A poet and writer and a compt who lived in the chateau that dominated the town as we rode in. 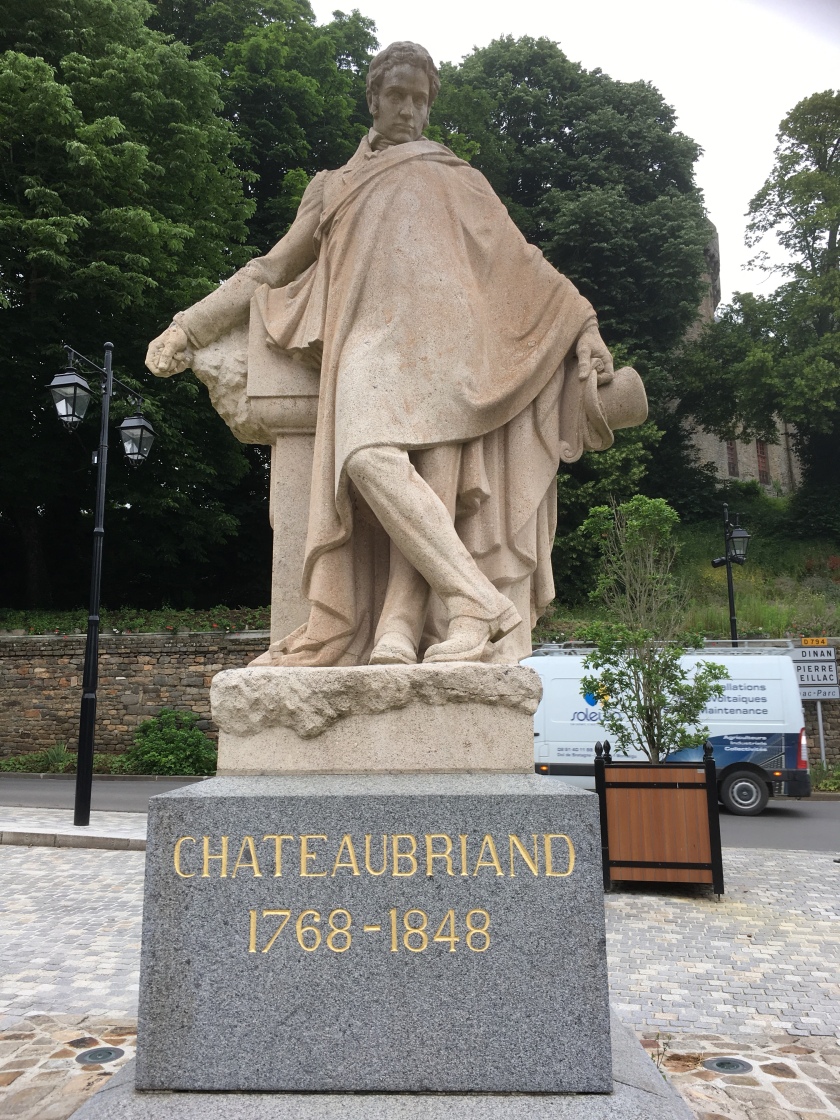 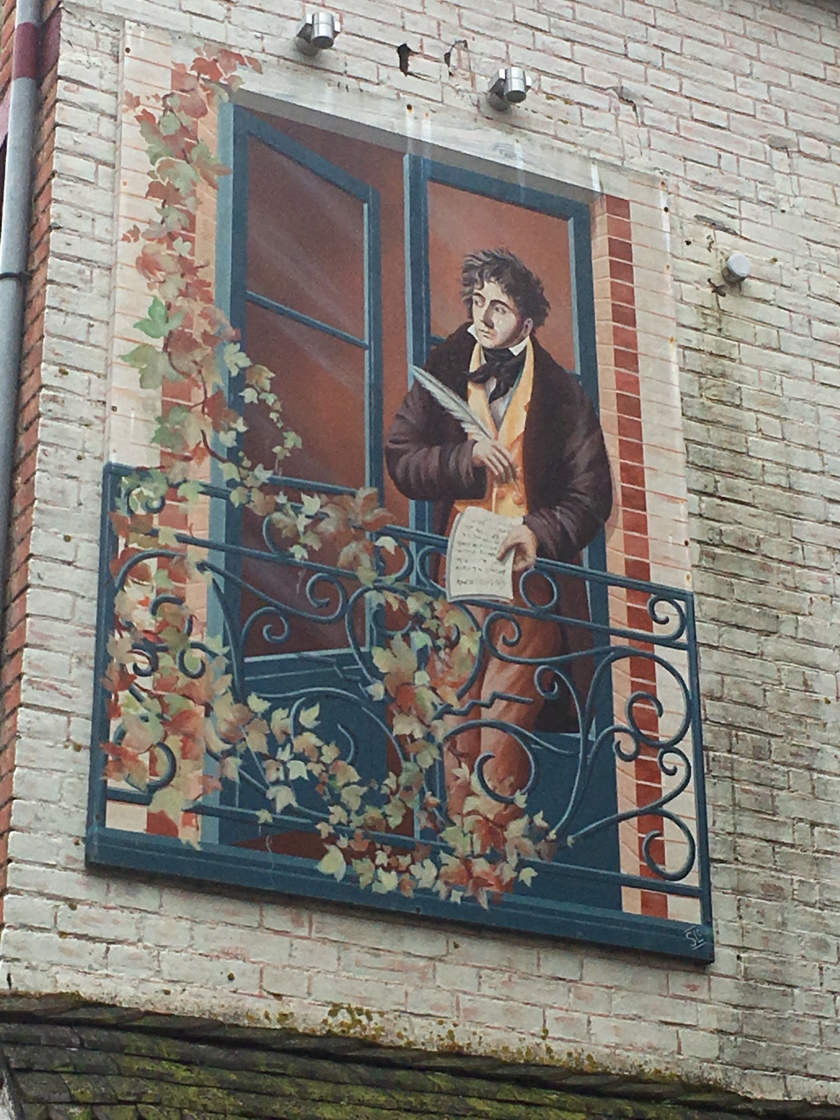 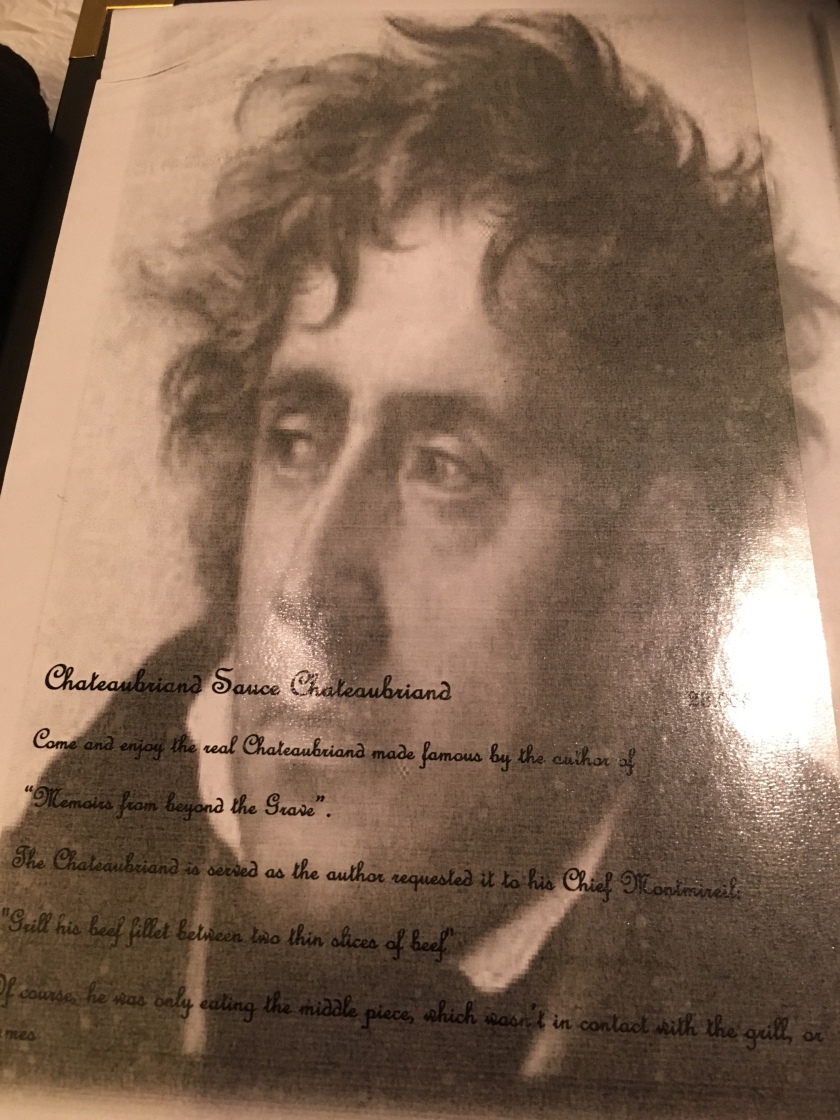 We got into town and checked into our hotel and our room had a huge bath in it so I filled it up and jumped in. Oh what luxury. My aching body from carrying bikes, cycling all day and just generally tired jumped straight in and it was wonderful.

We went for a big walk around town but unfortunately the chateau was closed so we couldn’t get in but OMG from the gates looking in the grounds looked gorgeous. It was a bit difficult to see the chateau unless you were entering the town but will get a photo before we leave tomorrow. Found a bike shop as I was having a little difficult with my panniers and was able to buy a new pair.

We walked around the town which was so old 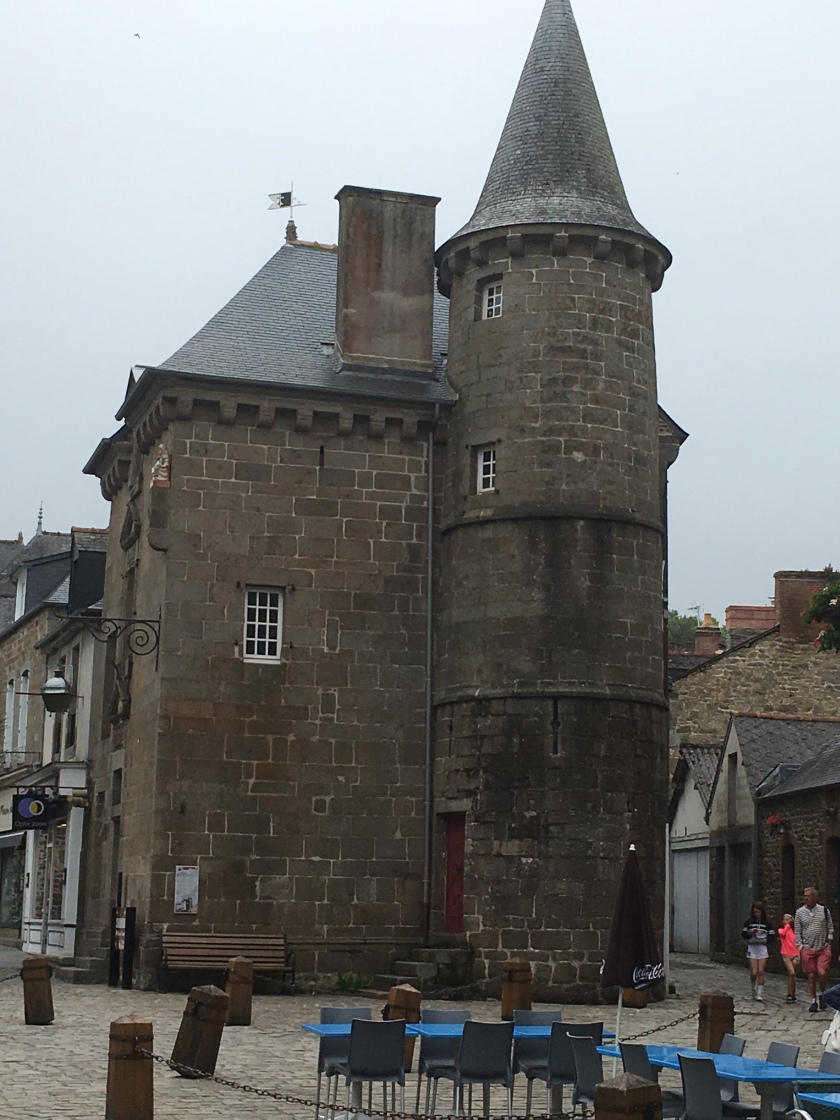 Then went back to the hotel where we met everyone for a pre dinner drink and then to dinner.

Well naturally we had to have chateaubriand 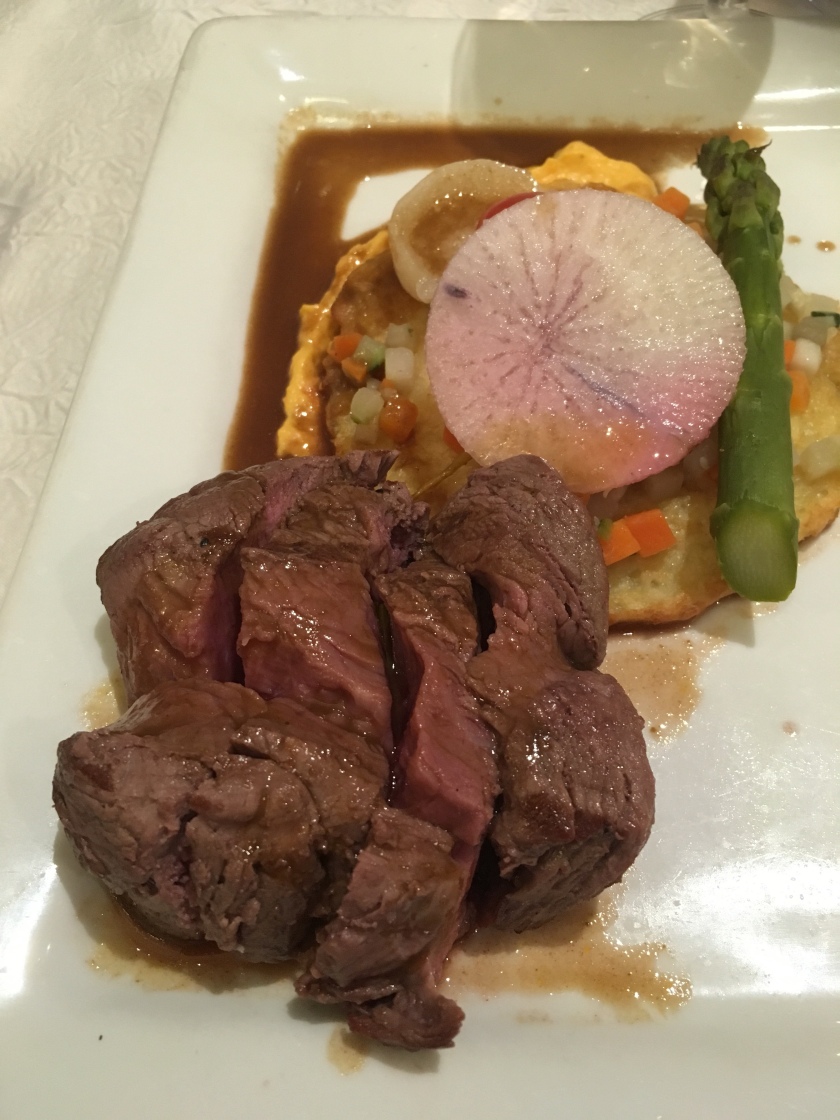 So afternoon a lovely dinner, great company, lots of laughs, tales of the ride today, Jane and I had a nightcap and hit the sack.

Tomorrow we are off too Mont St Michel which I am really looking forward to.

So yet again after a wonderful day

3 thoughts on “In the countryside”