After 33 days of up hills, down hills, up mountains, down mountains across mesetas, through towns, through hamlets, meeting a huge array of multi national people, talking, laughing, drinking, eating, sharing stories and memories that will be imprinted in my brain and heart forever – 799kms across Spain from France.  I am here and this is myself and Pierre with out Compostella de Santiago.

I entered Santiago this morning around 10am. Followed all the pilgrims into town and then through the narrow streets to the cathedral cane around the corner saw it and immediately burst into tears.  A very emotional day and as I sit here and blog a tear still comes to my eye.

So today started almost exactly as my journey from France started.  When I left st Jean Pied de Port it was raining and very overcast and cloudy.

I woke up this morning and it was a total whiteout with cloud.  Thick soup.  Set off from Lavacolla and as I was in no rush stopped at the first cafe for cafe con leche, Zumo de naranjo and croissant. Then along came Julie and Michelle and Arvis.

After our breakfast we all wandered off down a very foggy misty road.

Arvis and I were chatting for a while and we came upon Monte de Gozo which is a big monument at the top of the hill overlooking Santiago. The pope visited there in 1996 so this massive construction was made.  Well we could hardly see it for the fog let alone look out over Santiago.

We walked on and it didn’t take long for the city to appear.  I am pleased to say that walking into Santiago was a lot easier than a lot of the big cities I have walked into over the last 5 weeks. 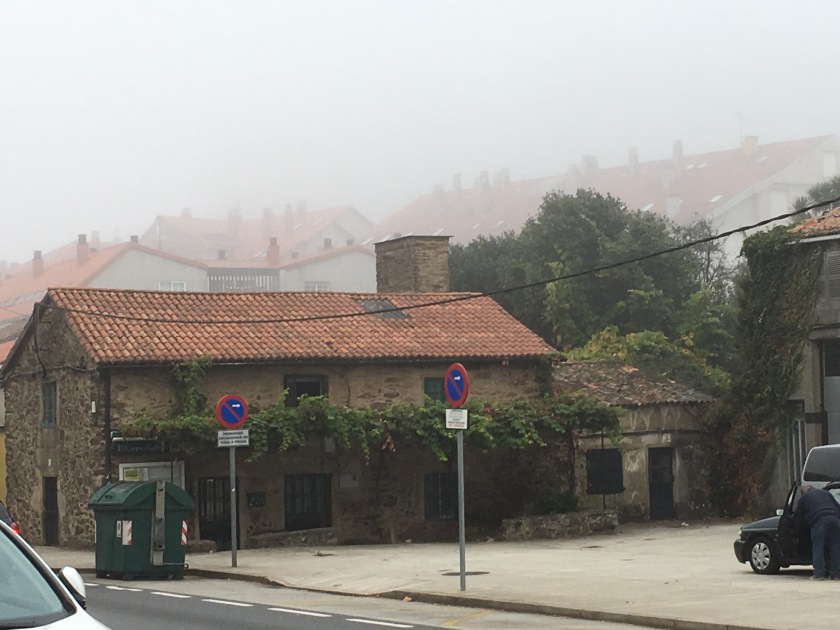 I just followed the pilgrims and there were a lot but not as many as I had expected.  Got into town about 10.30 and walked to the cathedral which is the finish of the Camino.

I came around the corner and saw the cathedral and just burst into tears.  I couldn’t help it.  It was so emotional. 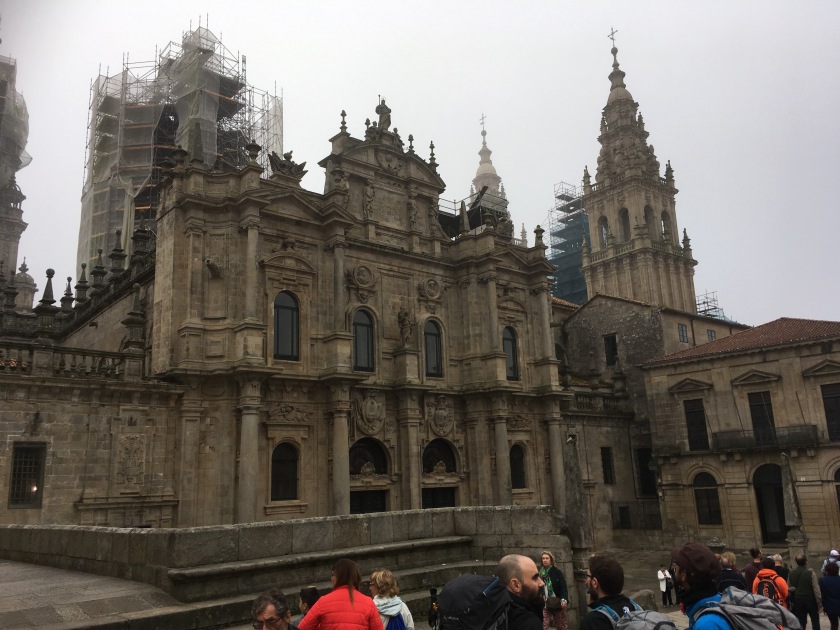 I turned around and there was a very beautiful Spanish man who I had met over the last week and he came up and I burst into tears and he gave me the biggest hug and held my hand until I had calmed down.  He then gave me a kiss on both cheeks and we parted ways.  He is getting the bus to Finesterre on Sunday also.

Friday the 13th was a good day for me.  Ran into Anna and Leonard on my way to my hostel to dump my bag and had another cry with them. Checked into my hostel and oh what luxury. I have my own bed in my own room with my own bathroom.

Checked into my hostel and after getting the key and leaving my bag headed back to the cathedral.

Everyday at 12.00pm they have a pilgrims mass.  Of course the crowds are huge and when I found the door to get in the queue was huge but there in the queue almost ready to go in was my lovely friend Ralph from Germany.  We said hello and I just joined him in the queue so went in quite quickly.  When I got in I walked around to look at the altar and OMG!  The lights were on in anticipation of the mass and even though there was scaffolding as there is a lot of renovations happening both inside and out it was still amazing

I found a spot as it was very crowded with tourists and pilgrims. The mass didn’t start until 12 and I was in the cathedral by 11.20 so just had to stand around but had a great spot.

The mass began with all the priests coming out

Then it all started in Spanish but I could understand that it was all about the pilgrims and he mentioned all the nationalities that walk the Camino and Australia was mentioned. Then a pilgrim got up and said something in Spanish and there was a choir and the organ was amazing
Then there was communion which I took part in, crying I might add, and then the piece to resistance what everyone had been talking the Botafumeiro.  A ‘Botafumeiro’ has been used since the Middle Ages, originally to clean the air when crowds of pilgrims having completed the Camino de Santiago arrived in Santiago de Compostela after their long journey. The Codex Calixtinus, the first Camino de Santiago ‘guide-book’, refers to the ‘Botafumeiro’ as Turibulum Magnum, which means this ritual has been taking place at least since the 12th century. The current ‘Botafumeiro’ dates back to 1851 and it’s made of silver-plated brass, weighting 53kgs when empty and up to 10 kgs more when full. 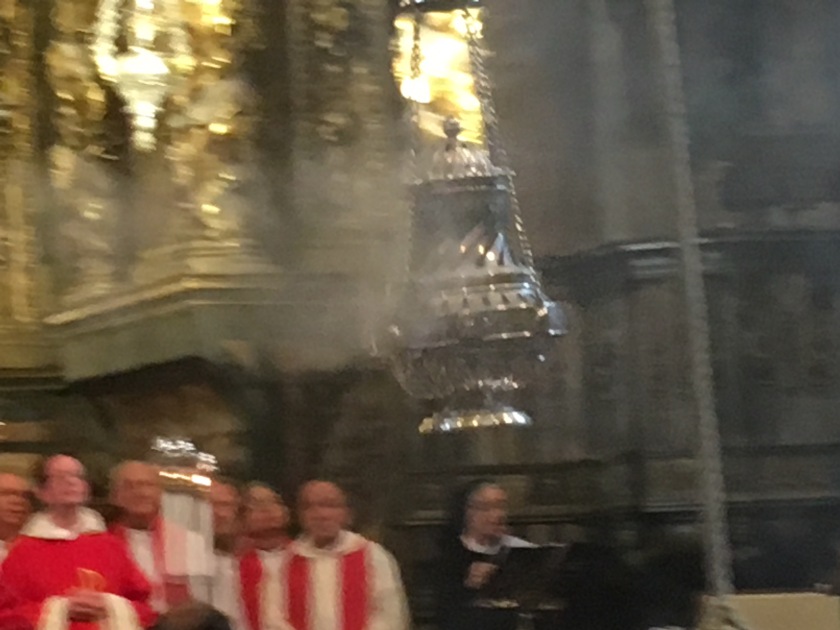 By the end of all that I was truly awestruck by it all.  Went for an hour and I had been standing up all that time.  If I had been walking not a problem but just standing I had to find a place to sit or get walking.

Thought t would try the Compostella office where you get your certificate for walking 799kms.  Well got there and the queue was ridiculous and there was Pierre and they had been standing in the queue for an hour and were about to go in so I joined them in the queue and we were out in about 15 minutes.  I think it was my lucky day.

Decided we needed to celebrate so we found a wonderful bar in the plaza outside the cathedral and were joined by about 4 other pilgrims and we celebrated, laughed, reminisced and just all pretty pleased with ourselves for making it.

I thought I would then go to the post office to pick up my package I had posted from St Jean and guess what! It wasn’t there.  They had sent it back to France however had no idea where it had gone in France!   Great.

Had a wonderful dinner.  Santiago is so alive, it was Friday night and everyone was out.  No one eats in Europe/Spain until at least 9-10pm so the streets were packed with people and of course we kept running into more pilgrims we had met on the way.

I am now tucked up in my bed in real sheets and had a lovely shower with towels and bath mats.  Oh the simple things.

Wifi is terrible and it is very late so not too many photos today.

Heaving a day wandering around Santiago tomorrow and trying to find my parcel.

Buenos noches me Amigos from the end of my journey but not the blog.

This is a text widget. The Text Widget allows you to add text or HTML to your sidebar. You can use a text widget to display text, links, images, HTML, or a combination of these. Edit them in the Widget section of the Customizer.
Loading Comments...
Comment
×
%d bloggers like this: