Big walk today. Lots of hills up and down and as I had my stride I just kept going.  Feeling tired but really good.

Only 6 people in my albergue last night.  2 from holland (brothers in law walking together. 2 young girls from Croatia (architecture students) and a lovely Frenchman who arrived later.

We had the mandatory Pilgrim dinner for €10. 3 courses with unlimited red wine.  Language was difficult but with hands and speaking slowly we got by.

I cannot believe how well I have been sleeping and because I am so physically tired I am usually in bed and sound asleep by 9.30 and actually slept in this morning until 7.20.

Packed and ready to start walking at 7.50 and the sky was pink as I headed out.

More open country today.  Lots of ploughed fields and walked through grapevines and olive tree plantations.  I am loving the vegetable gardens everywhere. I passed a little man today who had set up his garden in a little patch on the side of the ploughed field and there was a little stream running by so he had rigged up an irrigation system that ran through his garden. He was there religiously tending his plot.  Peas, potatoes tomatoes lettuce cabbage and another plant I couldn’t identify but very popular in most gardens. I will take a photo and post it so maybe someone can identify it for me.   Of course there is also rows and rows of red peppers.  When you get into towns or even on the outskirts or anywhere for that matter there are bunches and bunches of big red peppers hanging off people’s houses drying in the sun. 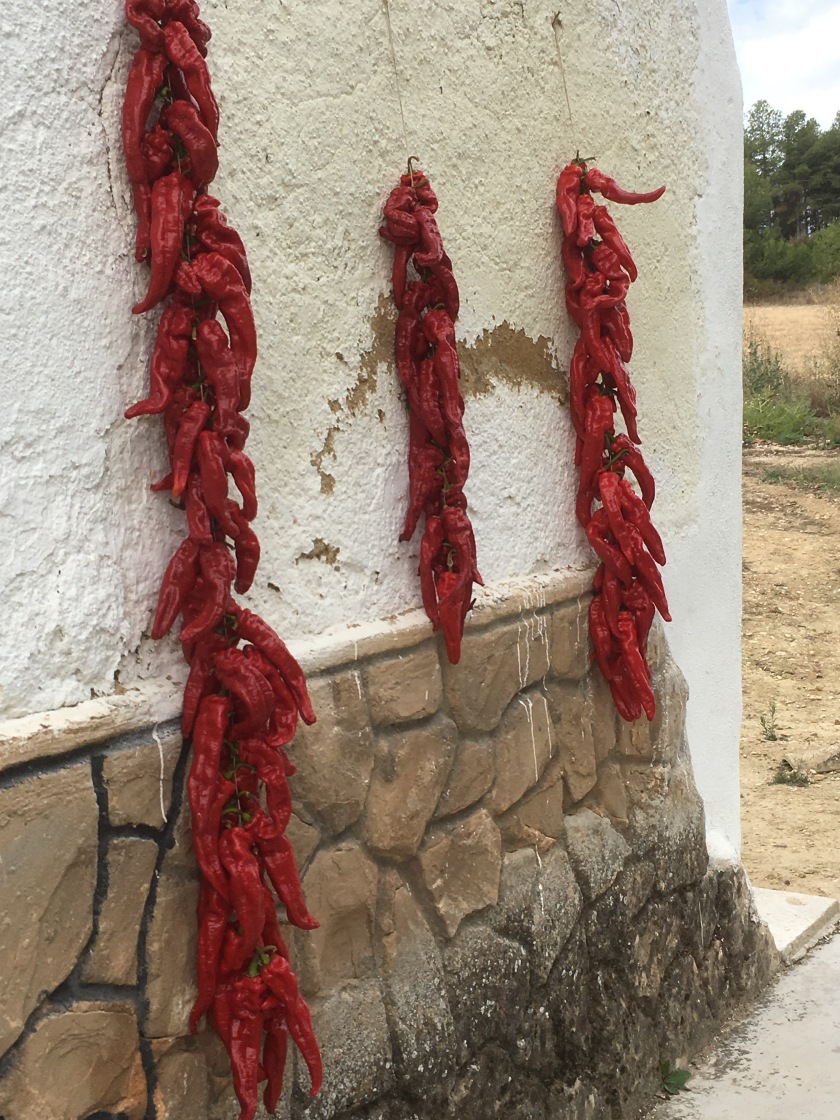 It was a lovely day today.  Sun shining and blue sky with puffy clouds.  Cool wind but still able to get away with shorts and tshirt.  Does get cold in the afternoon and first thing in the morning  Walked along a real roman road today.  This is how old this place is.  Quite a contrast from the highways that now cross the country.

I am pleased to say that we don’t walk too close to highways or main roads very often.

Walked into Estella today which is a big town. 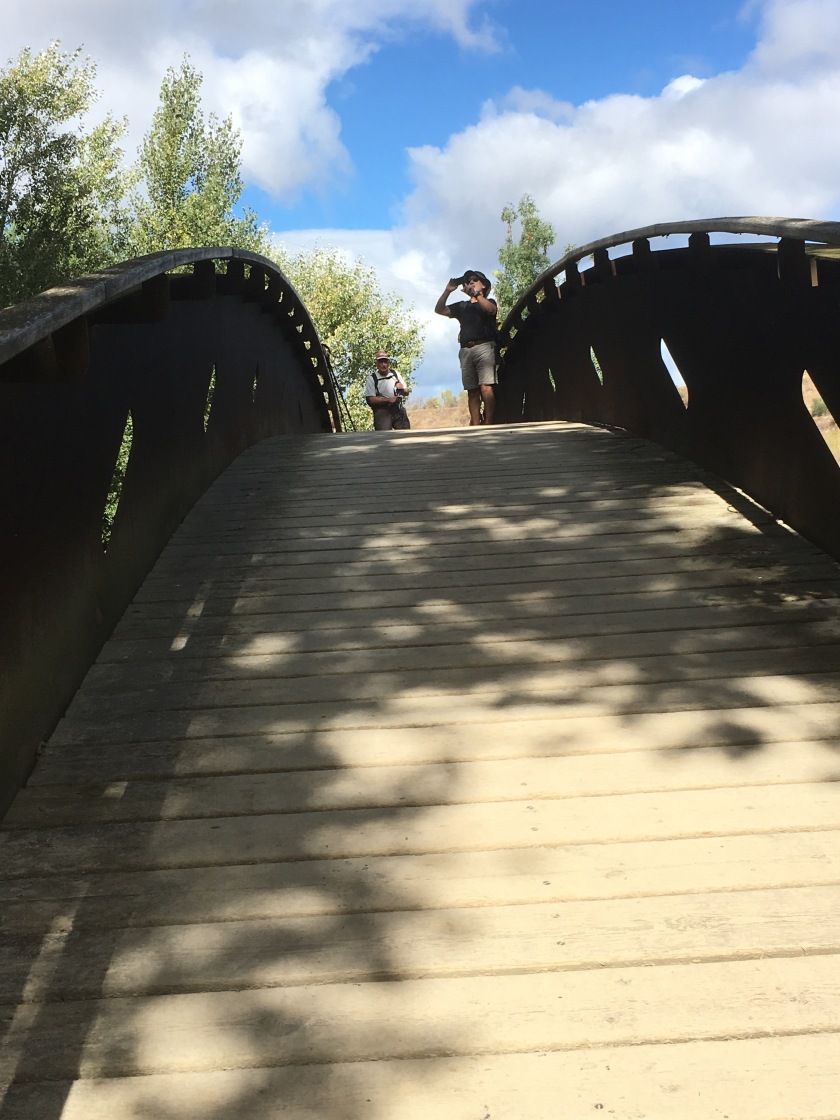 Walked in through the old part and it was old.  Of course churches everywhere and they were old.

Climbed up a lot of stairs to church of San Pedro de la Rua. Stunning inside and built in the 12th century.

Of course St James had passed through here so there was another statue of him inside.   I was then shown out the back to the cloisters and they were beautiful.  I just wanted to sit down and take it all in.  It was so old in a lot of the alcoves in the cloisters they had relics from a very long time ago.  I would say 12th century.   Luckily when I came out there was a modern day lift that could take me down the 3 stories I had walked up to get there.   Hard sometimes with a backpack on. 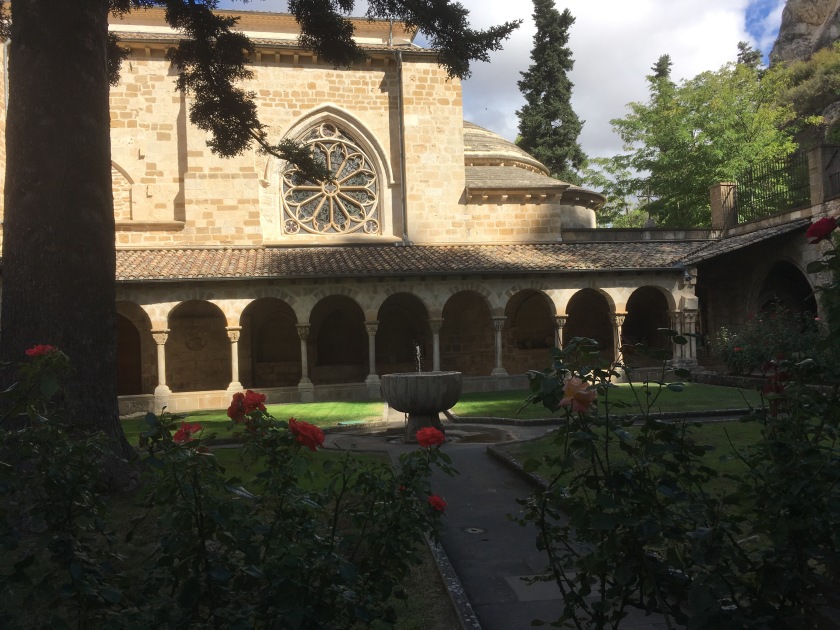 Wandered through the old part of town and then turned a corner and it was big city time.  Traffic lights fast cars lots of people and noise.   I had to get out!!!

But first, priorities, I needed a cafe con leche.  Found a lovely little bar as cafe’s are called here where you can get breakfast, coffee, alcohol anything you like.  So civilised!!!

I then walked out of town and headed to the next little town of  Ayegui. Only about half a km out of town but a highlight.

You won’t believe this but the Bodegas.   Yes the wine people have a winery here and they have a wine fountain for pilgrims.  Yes there is a lovely stainless steel fountain with a tap and one has red wine and one has water.  It was fantastic. Of course I had to stop and have a swig. 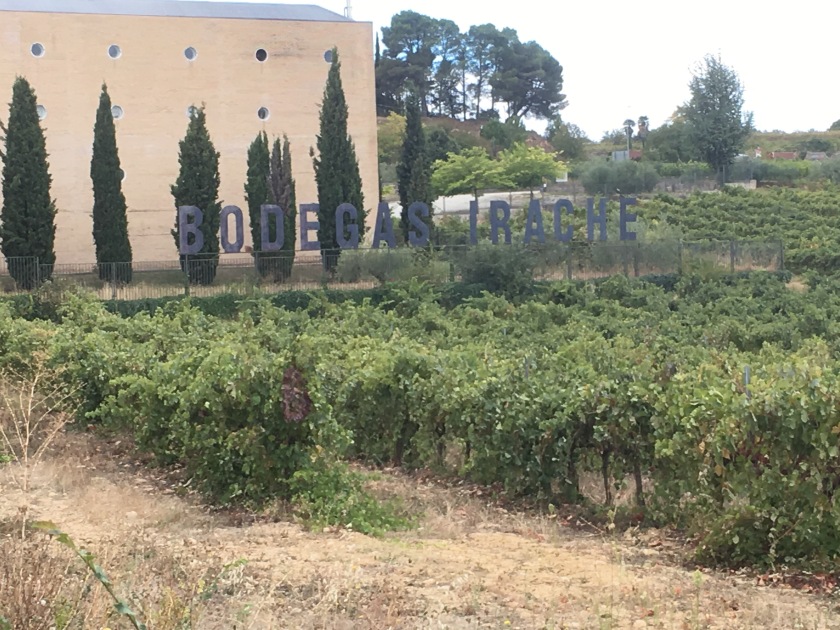 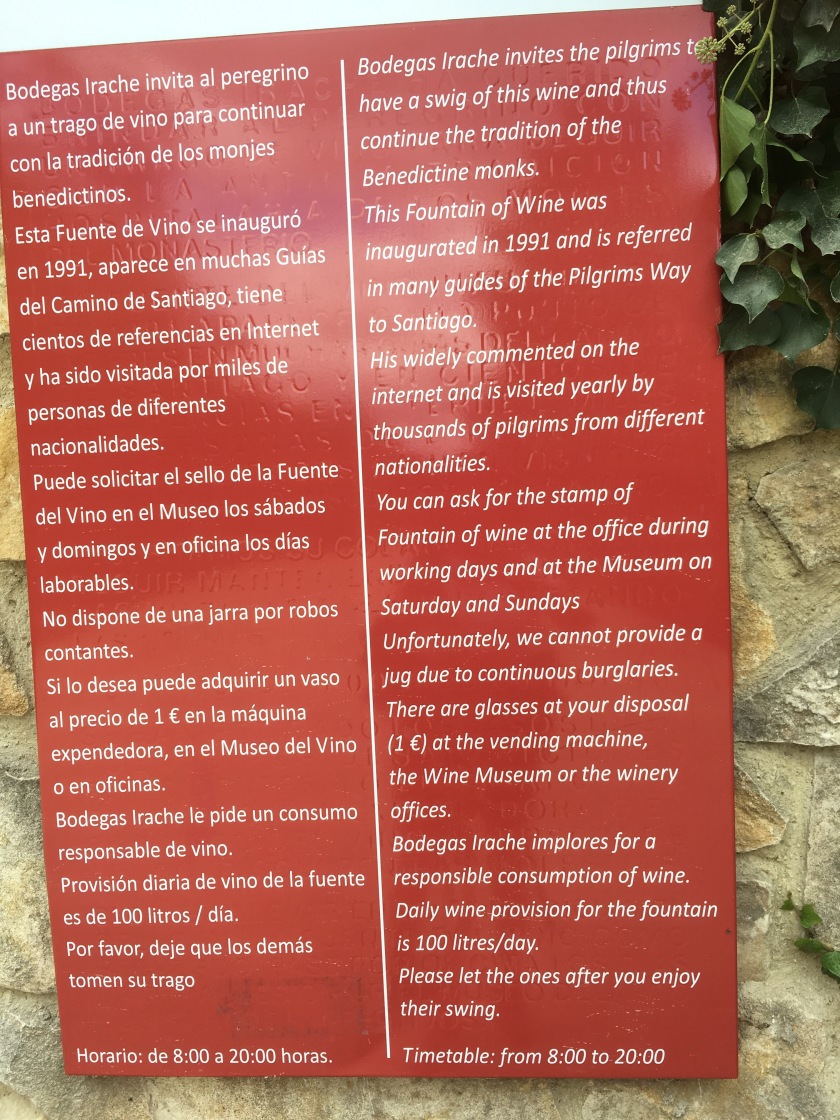 Apparently the wine people fill it everyday with 100ltrs of red wine for the pilgrims. Now that is civilised! Got to the top of the hill past the fountain and here is a real foundry with a man beside his fire making all sorts of things.   Lots of locks and door knockers. 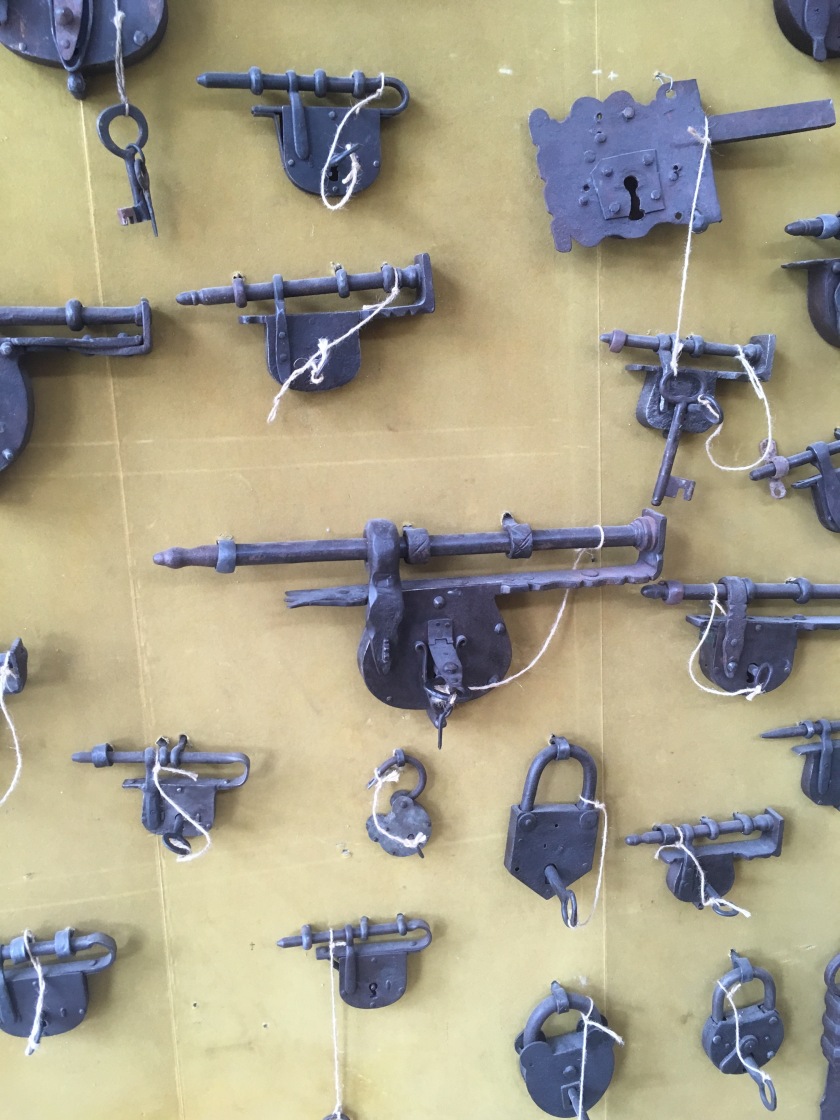 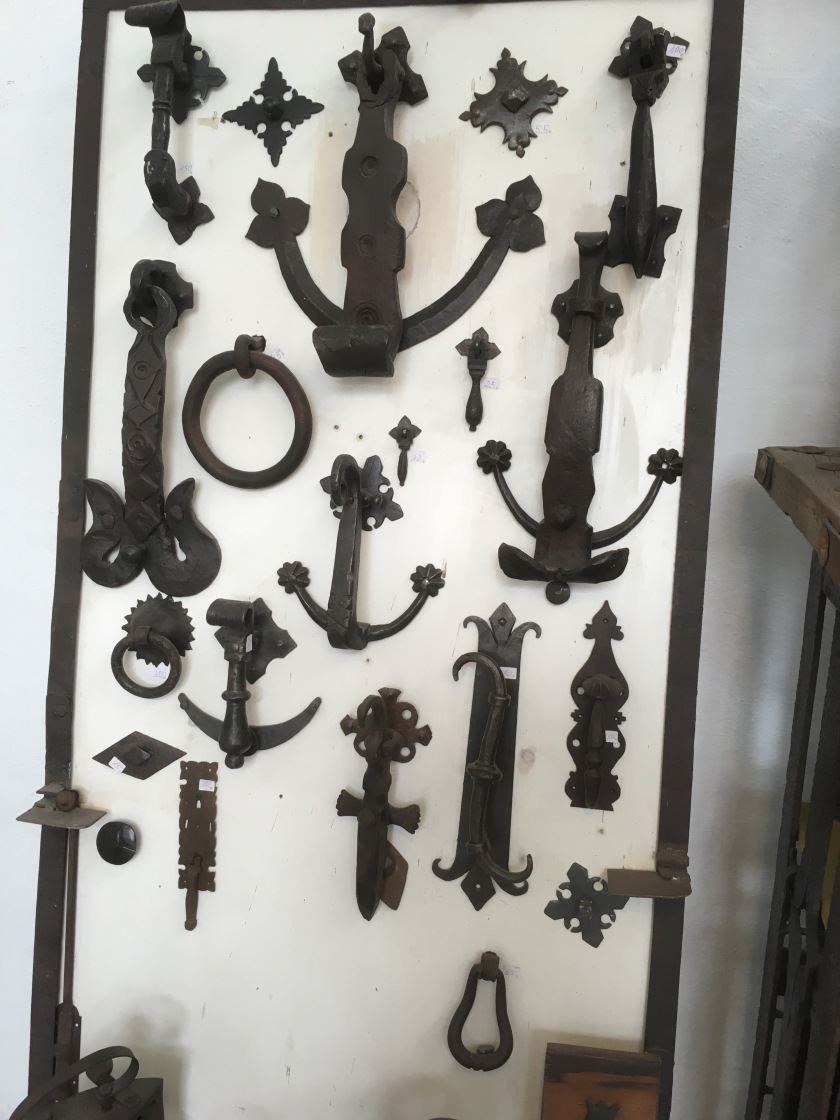 Just up the hill was the very ancient Monasterio de Irache. This monastery is connected to the Roncesvalles monastery I stayed in on the second night.   Apparently a community of monks served pilgrims here since the 10th century.   Gee I am impressed with my history 🤓. There was also a wine museum. Like the chandelier 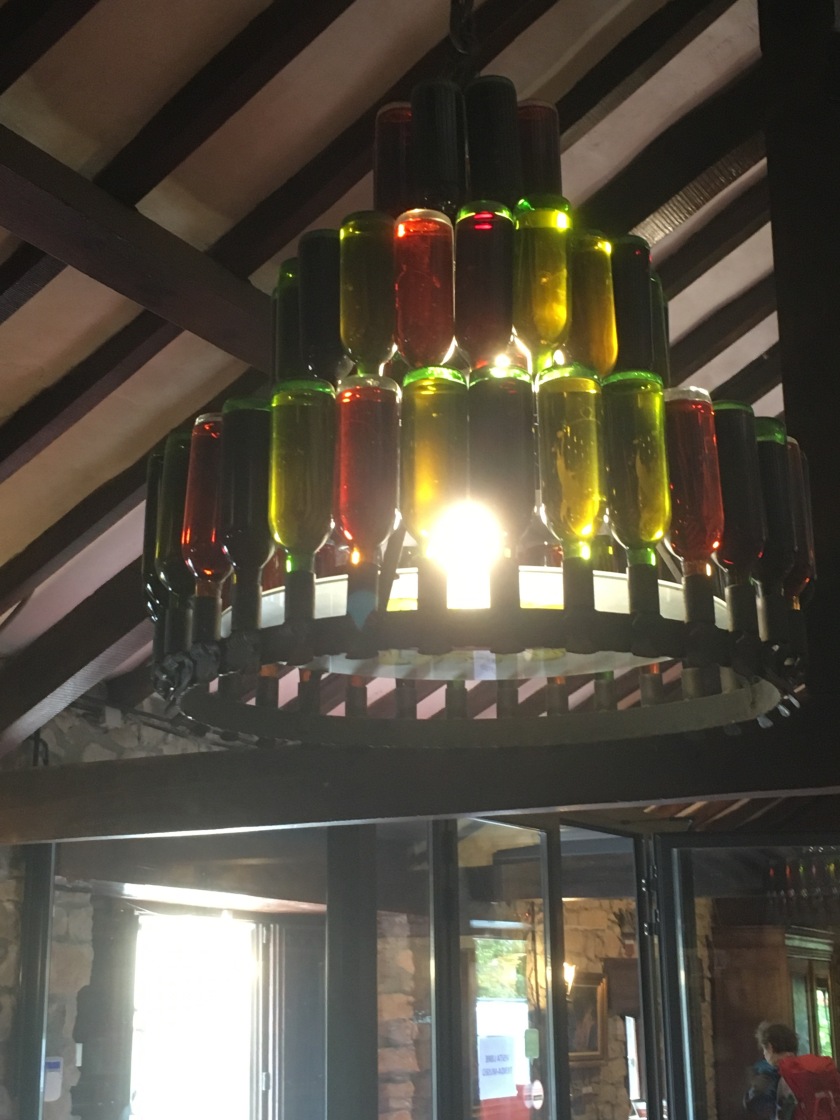 I decided to press on and walk a few more kms as it was only midday.   Walked over a few mountains and kept running into people I had stayed in albergues with or just had passed them or vice versa.   It is such a friendly walk. Here are some rural shots of the day 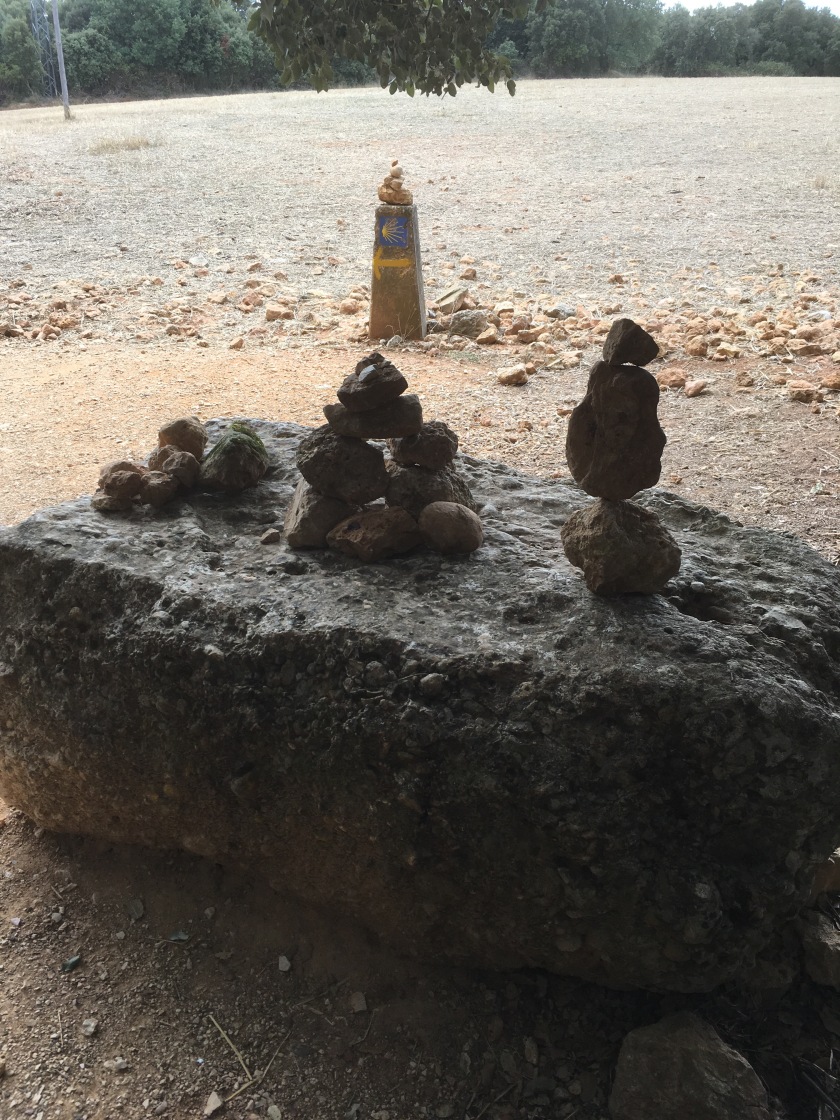 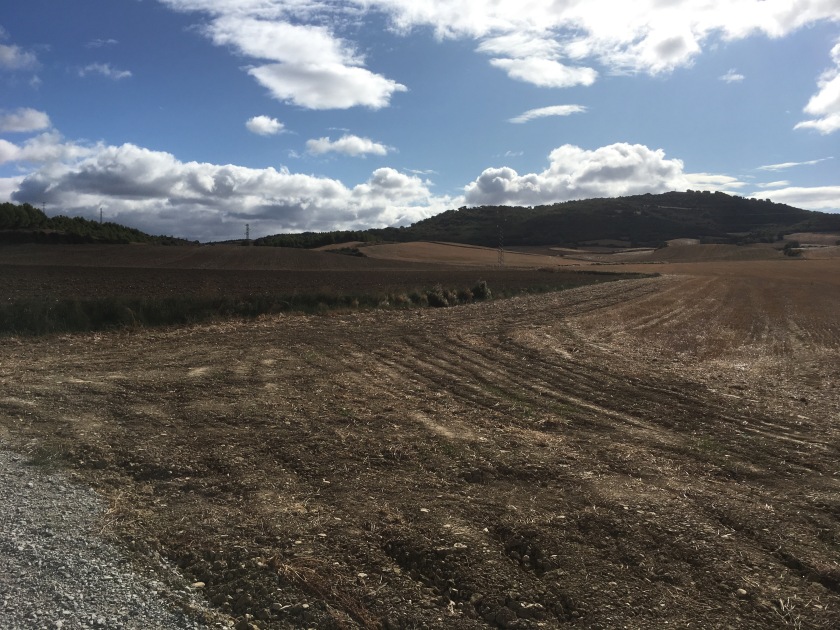 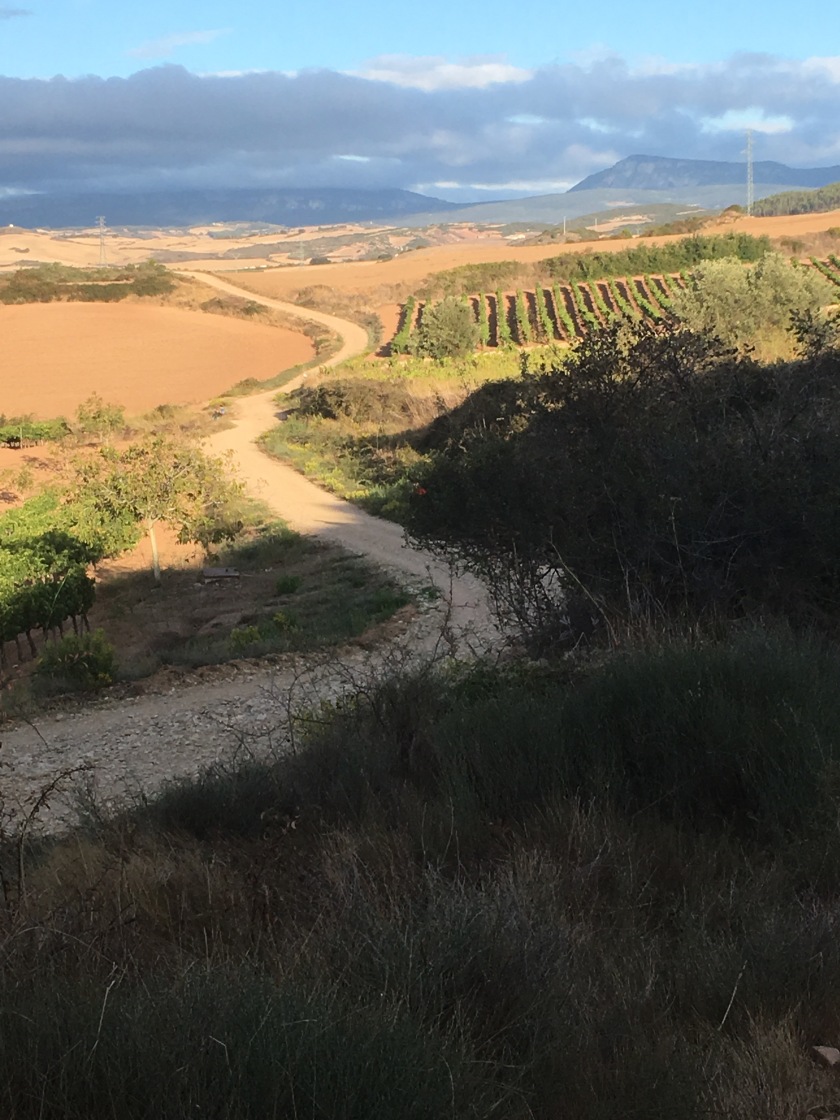 Have I told you all how much I am enjoying this.

About 3pm today when my body was starting to tell me it was tired I decided to stop at a little town on the top of the hill called Villamayor de Monjardin. There is a monastery on the top of the mountain and again I wonder how it got there!

Churches everywhere and the plaza was happening with music, firecrackers as there is a fiesta on tonight. 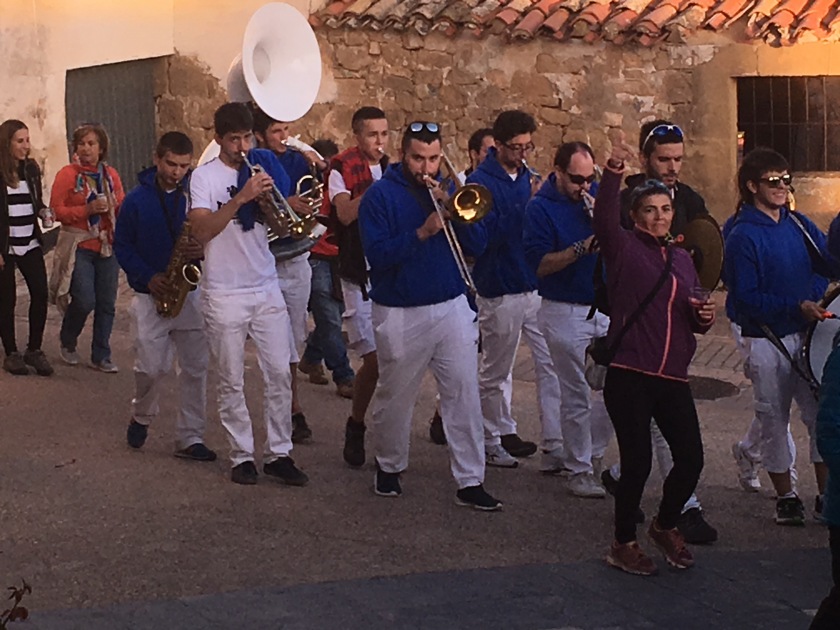 I don’t think I have told you about the Credential which is sort of like a passport for pilgrims.  Everywhere you go and everywhere you stay you can get a stamp in your credential.  This proves to the people in Santiago that you have walked The Way and you can then get your Compostella. 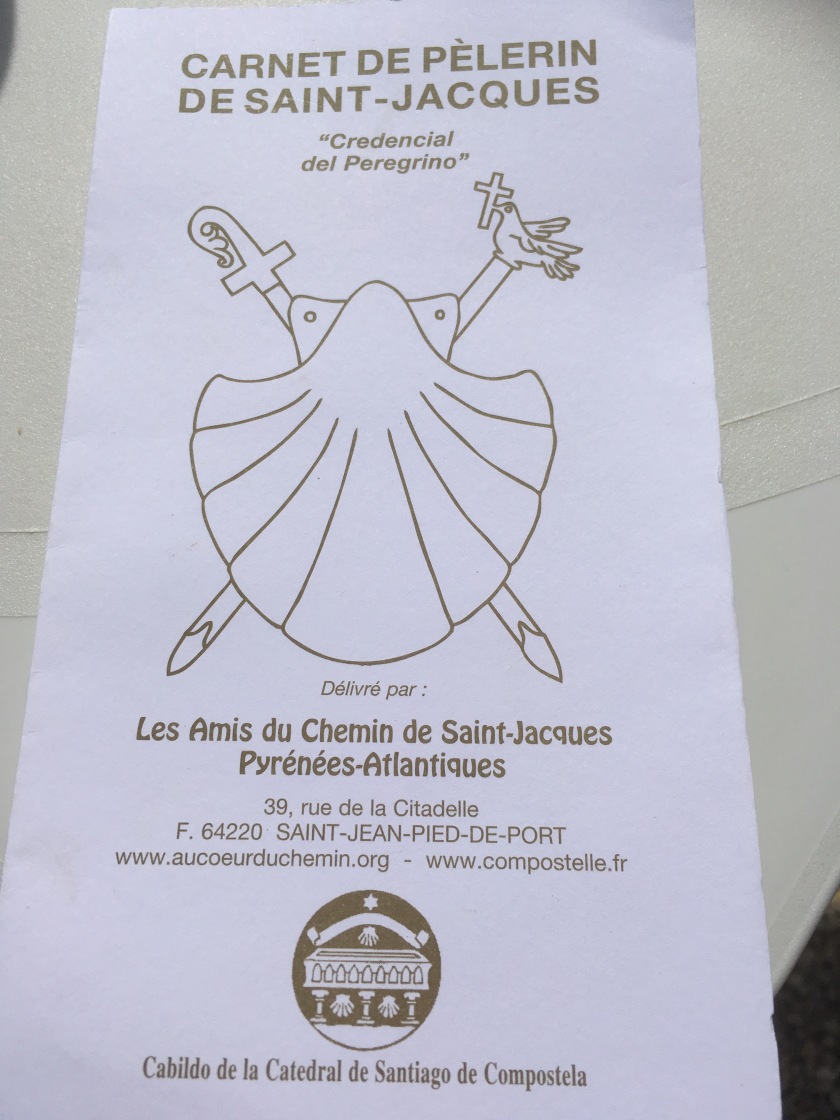 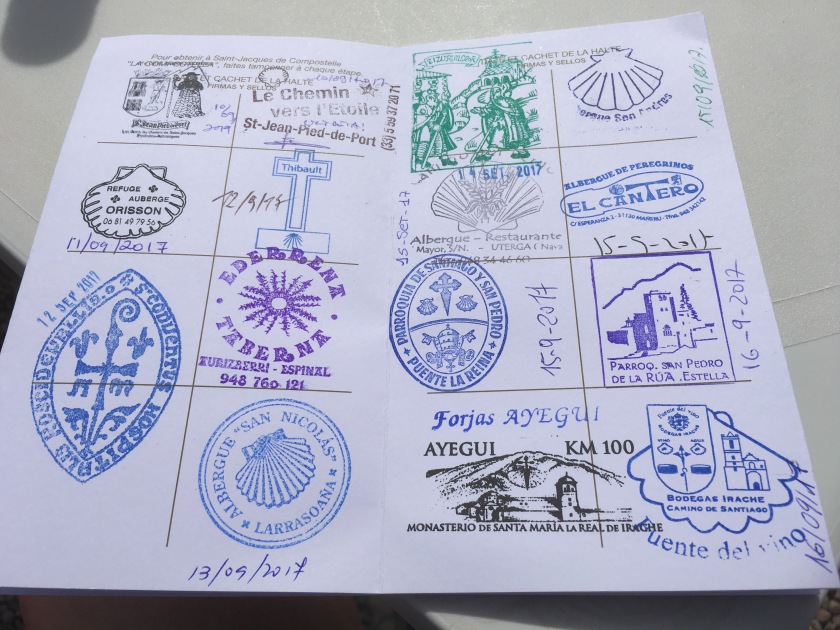 So today is almost over another tired girl and ready to hit the hay.